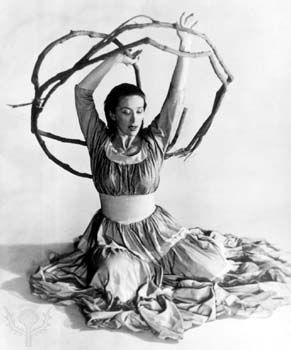 Martha Graham was born in 1894 in Pennsylvania. She spent her teenage years in Los Angeles. In 1916, she joined a dance school. Graham was 22 when she started dancing, which is considered very late for a serious dancer.

Seven years after beginning her dance training, Graham moved to New York City. Graham danced, modeled, and taught dance classes to stay afloat. In 1926, she started her own company, the Martha Graham Dance Company. She also taught dance at Bennington College and New York University, and was a founder of the dance program at Julliard. She is considered one of the major creators of modern and experimental dance.

As a performance artist, Graham did not really come to her own until the 1940s, when her dramatic, angst-ridden dance dramas became popular. Graham’s style of dance was unlike anything previously seen, with dramatic makeup, sculpted sets, and painful rountines.

Graham continued to dance on stage until 1968, well past the age of retirement for most dancers. She was awarded the Presidential Medal of Freedom in 1976. She died in 1991 at the age of 96.

Martha Graham changed the lifescape of dance forever. Her endless chains to dance brought the world into an era of modern movement and realism. We saw displays of soulfulness with full range of emotions crackling like fire. Martha had to dance, she had no choice; it was her passion.

Martha is regarded as one of the principal pioneers of modern dance. Graham paved a road for the dance world like none other. She danced and choreographed for her entire life and received several honors such as getting the key to the city of Paris and receiving the Imperial Order of the Precious Crown in Japan. She blazed a path into the world by being the first dancer to become a cultural ambassador, to perform at The White House and to be awarded the Medal of Freedom; the highest civilian award.

At the age of sixteen, Martha found herself interested in dance. She spotted a poster for a dance performance in Los Angeles by Ruth St. Denis and she had to go. The performance was a revelation to her; she decided at that moment that she would devote her life to dance. Her family was not happy of this news, they expected their daughter to persue a higher occupation such as a doctor, lawyer or scientist. She had no choice though, she had to dance.
At this time, the high profile dance world consisted mainly of ballet and burlesque/vaudeville and folk dancing.

At the age of twenty, Martha enrolled herself into the Denishawn Dance School, and began studying under Ruth St. Denis,, a dance pioneer who was starting to redefine the concept of American dance. Denis’s dancing had a natural flow, and she danced with bare feet .At first site, the school told her she didn’t have the right body type to make it in dance and that she was much too old to start. Martha didn’t let that stop her from perservering in her art, her consistantency and passion led her to work incredibly hard, and she was able to train her body to great precision.

Graham’s early work wasn’t well-received by audiences. Dance audiences were used to seeing dance as a form of soothment. They’d go to Broadway or the ballet to cheer them up or to be entertained, not to think and to feel. Martha was not providing the type of dance that merely entertained. She was using dance as more of a therapy or a guinea pig in herworld of emotional chaos and passion. Martha’s style was infused with strong, precise movement and energy charged abdominal contractions as well as controlled falling and rising. She actually despised the term “modern dance”, she much rather preferred the term “contemporary dance.” Her idea was that the concept of “modern” was constantly evolving and was thus not correct as a definition.

Martha then directed the dance department at New York University and later became one of the founders of Julliard, a now prominent University of the arts.

Martha continued dancing well into her 60’s, she could not bare to leave the stage and the world of dance.

Graham’s love of dancing was so passionate that she wouldn’t leave the stage though critics said she was past her prime. When the voice of the critics grew, Graham retired from the stage. Her final performance was when she was 76 years old. 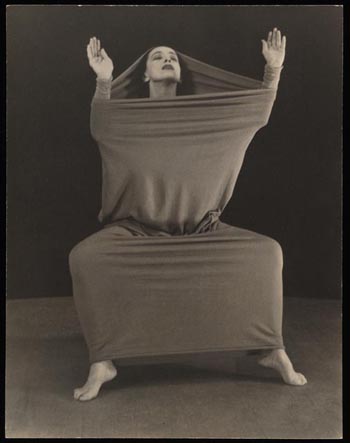 TWENTIETH CENTURY DANCE – an excellent summary of all the pioneers & photos:

Freedom of the Spirit!

Modern dance has a spirit of rebellion. A pioneer is someone willing to stake everything on an idea, on a concept, on a change. Dance is an expression of freedom, an exploration of yourself and since humans are multisensored this exploration journey is endless and forever.

“Dance is the hidden language of the soul.”

Who cares if nobody is watching!